Hop on the Bus, LET’S PARTY! 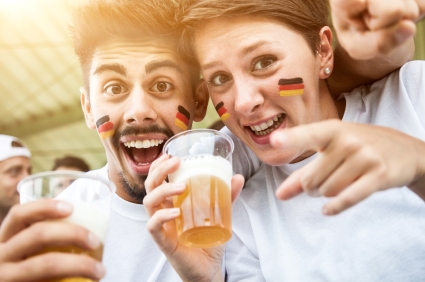 When parents commit to a team, whether it’s high school, travel or recreational, they tend to develop relationships with other parents.  The depth of the relationships can vary from a courteous, ‘How are you?’ to getting the families together for dinner every weekend and asking Jimmy’s dad to be your new born’s God Father.  Developing relationships in youth sports is a positive side effect from the constant practices and games that keep families on the go constantly and sometimes the friendships created can last a lifetime for the player and the parents.  However, I’m seeing quite a few parents take social to the next level by turning a youth sports tournament into a party, complete with booze, food, and music resembling a fraternity  or sorority party on a football Saturday which prompts the question, “Should alcohol and youth sports be connected?”

Here are a couple of common scenarios when alcohol is being consumed at youth sporting events:

1. Sneaking off to the car or RV and getting your groove on and possibly doctoring up your Tervis or Yeti when heading back to the game.

My first question to this scenario is what kind of message are we sending to our kids?  This dives into overall parenting and I’m not out to tell people how to parent their kids as we all could use help from time to time, included.  But, I do know that slamming a few Toddies between games may not be ideal when put into a situation where maybe there is a call you disagree with from an official or heaven forbid, your kid doesn’t get to play and you’ve got a beef with the coach that should probably be dealt with on Monday, but the beer muscles kick in and waiting until Monday doesn’t become an option.

2. Purchasing alcohol from the facilities that serve alcohol, like Indy Sports Park and Woodside Sports Complex, and drinking while watching the kids play their sport.

When facilities sell alcohol at youth sports events, it makes me cringe, because I know it’s an excuse for some parent(s) to tie one on because it’s “approved” by the park.  I understand these facilities are a business and generating revenue can be challenging at times.  Does selling beer at an 8U softball game really make a dent in the overall scheme of things?  Would increasing the cost of a fountain coke that costs a penny by $.25 help to address the loss of profit from a $3.00 beer?

The ramification from either scenario can be detrimental, the bottom line is, alcohol at sporting events is a recipe for disaster.  Don’t get me wrong, I like beer just like the next guy, but becoming youtube famous like some of the clowns here isn’t high on my list.  For a moment, let’s forget about the message we’re sending the young people we’re around at youth sports events and focus on the professional and legal ramifications of drinking at these games.  NEWSFLASH, everyone has a that can record video and upload it to the world in a matter of seconds they did to Wichita St Shocker Head Coach Gregg Marshall’s wife when reports say she was belligerent due to being drunk and ultimately needing to be escorted from the game.  If nothing else, does the potential to harm your personal reputation and those you love become a factor when deciding to have some pops at the 10-year-old football championship?  Not to mention, 70% of youth sports officials quit after three years in part due to the verbal abuse they receive from parents and coaches.  The continued decrease of officials is a huge problem because nobody wants to go out there for little money to be lambasted for two hours and then potentially assaulted in the parking lot by ‘ chuck’s dad who knows he is going Division I but, the foul called by the official prevented that from coming to fruition. Abusing officials has become such a challenge in youth sports there have been initiatives created like Brian Barlow’s “You’re Offside” to highlight the wrongdoers and hopefully, if nothing else, shame people into acting appropriately.

There are enough social pressures that exist today for young people, why potentially add to that mess by drinking at their games?  Instead of popping the top, mix in a Coke and a smile and go on your kid.